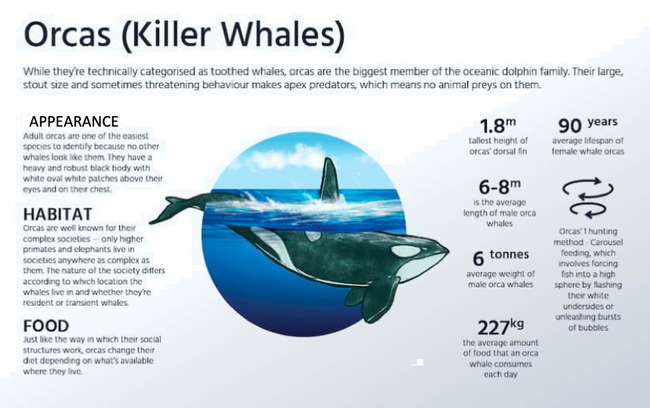 ​The killer whale, also known as 'orca', is one of the most famous toothed whales. They're named after Orcus the Latin god of the underworld because of his demonic look, black body and white pigmentations above the eyes. The name 'killer whale' comes from the occasional aggressive behaviour against other marine fauna. Their primary source of food differentiates due to its availability and geographical location, with some killer whales only feeding on fish, where others may only hunt sea lions, seals, walruses and even other whales. Even though there have been cases of injuring whale trainers in theme parks, they are no threat to humans.

Orcinus orca is divided into three different types: resident, transient and offshore. Residents stay at the same area and only feed on fish and squid. Transients almost feed exclusively on marine mammals and travel in small groups. Offshore orcas appear a bit smaller than the other types and feed on fish schools, travelling far away from the shore to reach them. All of these types have complex social structures and live in families including as many as four generations as the females can reach 90 years old. They are the largest members of the dolphin family.